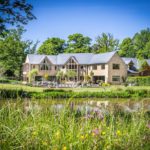 PHPD finds out more about Welsh Slate, a home grown slate which has recently proved the perfect roof for a luxury new build.

When professional landscaper Claire Merriman commissioned an architect to design her latest development, they immediately proposed Welsh Slate for the roof. She was happy to acquiesce but wanted to compare the product with its rivals before capping the new five-bedroom, five-bathroom private house in five acres of stunning countryside in Surrey. 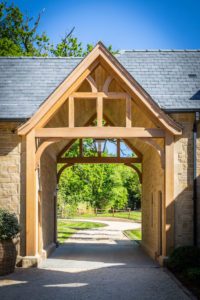 Some 14,000, or 500m2, Welsh slates have now been used on Queen’s Lace, which finds itself on the edge of a Conservation Area in the village of Shamley Green, an Area of Outstanding Natural Beauty as well as an Area of Great Landscape Value.

Claire was familiar with the Welsh Slate name but had never used the manufacturer’s roof slates, or any of its architectural products such as cladding, flooring, paving, aggregate and interior surfaces such as worktops, before in any form. Now it is likely to feature inside as well as outside her future projects.

Queen’s Lace is almost half as big again as the 1950s five-bedroomed house it replaces. Her brief to winning Surrey architects Mitchell Evans, who were one of six architectural firms she approached, was for a modern take on the arts and crafts architecture typical of the area.

This is reflected in the Welsh Slate roof which has mostly been laid to a 47° pitch apart from the lowest four courses of slates which are at a shallower pitch, with the change in pitch eased by a band of lead. The Cwt-Y-Bugail slates feature not only on the main house but also the granny annexe and a three-car drive-through courtyard building.

Claire said: “The rival slates look quite similar, especially on the internet, but once we saw all of them on the panels, the choice was obvious. You just get more depth and character with the Welsh Slate. It doesn’t look as flat. It has a lovely softness about it.”

“Everything we have done on the project has been with sustainability in mind,” she said. “We wanted to make it as environmentally friendly as possible, so we have always tried to source locally. We wanted to use the local sandstone for the façade, but stocks were running low, so we had to opt in the end for Blaxter, which is very similar looking.”

The Welsh slates were installed double-nailed with aluminium nails on a cut timber roof with open eaves over a total of eight weeks for main contractor KM Grant by specialist roofing contractor MJM Roofing. 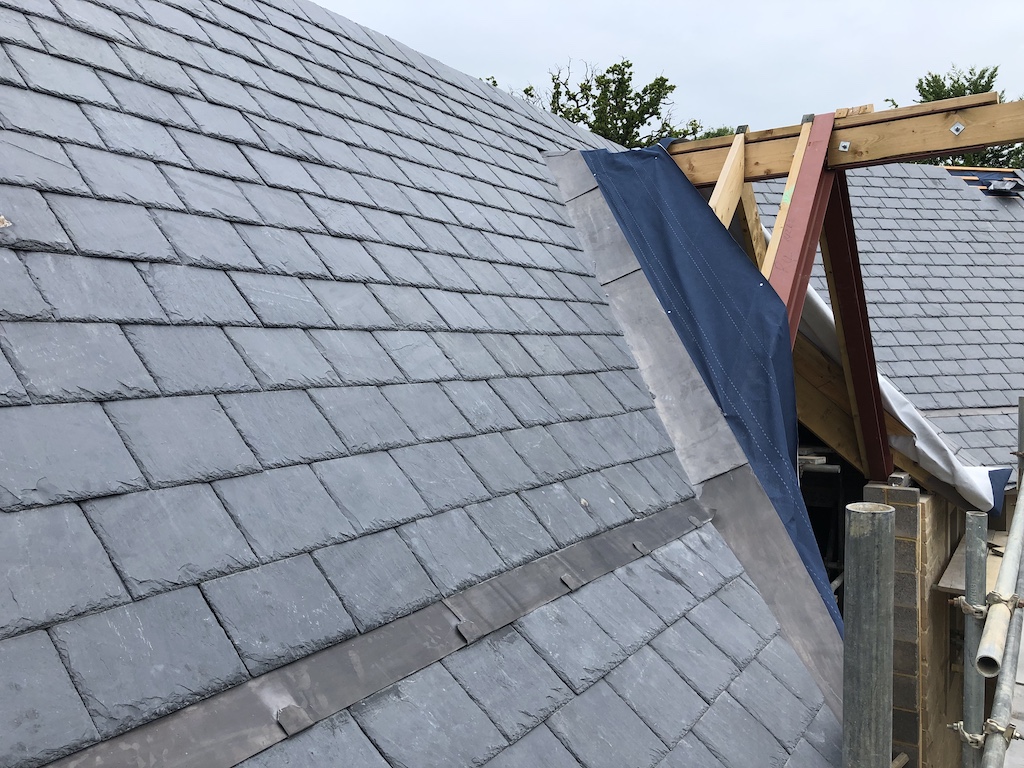 MJM’s managing director Malcolm Marshall said: “The roof had a change in pitch at the eaves which created a sprocket detail where the slates had to be broken with lead flashing. This created different angles for the first part of the valleys.

“The project was quite challenging as we had stone gables to contend with, not timber. We had to ensure they were perfectly flat before we installed our roofing battens and slates. As the roof was carried out in phases, much of the protruding roof elevations were constructed from steel which arrived at a later date to the main area of roof. This meant we could only cut one side of a valley to which there were many. We would normally work on a completed roof structure and work our way round completing elevations as we went.”

He added: “My team and I were impressed with the Welsh Slate. Not much grading was required. Due to the thickness and very rivened edges the slates do sit well. We have used Welsh Slate on several occasions, mainly on large, new-build houses around the South East, and have never had an issue with quality.”

Claire, a mother of three, was quick to mark her landscaping expertise on the plot. As soon as the first stage of planning approval was through, late in 2017, she planted some trees in an area which was slightly overlooked, and these are now 6-7m tall. 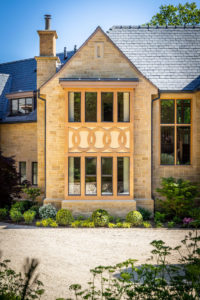 They complement the lake and natural springs that already existed on the land as well as a new wildlife lake and meadow that have been created and a small stream through the site that has been regenerated. It is all a far cry from the completely overgrown site that it was. Their plans for the site garnered 26 letters of support, with no objections.

“We had been concerned that at some point the site would be split up into individual elements and even though it’s on the edge of the village we were keen to see it retained as one property,” said Claire who is a proponent of integrated design, where all aspects of a build – the structure, landscaping and interior design – should be considered holistically from the start.

More on Welsh Slate
The Cwt-Y-Bugail slate used on Queen’s Lace is one of two colours available from Welsh Slate and each comes with its own unique visual characteristics.

Cwt-Y-Bugail slate, from the quarry of the same name, features natural blue grey banding, while Penrhyn Heather Blue, from Welsh Slate’s main Penrhyn quarry, is a natural heather blue and may include natural green marking.

The slate is so durable it is guaranteed for 100 years, although many Welsh slate roofs around the world last well in excess of this. It is usually the roof battens that wear out first! Non-combustible as a roofing and cladding material, it is unaffected by normal extremes of temperature, retains its colour (even in UV light) and is impermeable to water.

Welsh Slate roofing is crafted using traditional skills and techniques developed over centuries, combined with modern production processes to ensure all the roofing slates are of the highest standard. Slates are dressed to their final size with traditional chamfered edges, graded for thickness and packed for despatch.

From its source in North Wales, Welsh slate has been used and crafted by many generations of people from all walks of life since early Roman times. Penrhyn Quarry has been at the centre and the focal point for UK natural stone and its heritage since the 13th Century and a major operation for over 400 years.