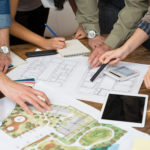 The importance of leadership

Leadership in the housing sector is key to a successful business. There are many well-known leaders in housebuilding who espouse the values of the companies they have led. There are civic leaders and politicians who also shape development by setting standards and making decisions on planning applications and planning appeals.

Often these groups work together to shape and deliver the vision for new places. A good example of partnership working is the Housing Growth Deal in Oxfordshire between Central and Local Government and the involvement of delivery partners in the form of infrastructure providers and developers.

However, leaders do not always agree and this is often brought to the fore during times of change. Local elections are a notoriously difficult time for those promoting new development as the ‘dumping of sites’ can dash the hopes of some, where caught up in local politics playing to the doorstep.

The campaigns for leadership of the Conservative Party and by extension Prime Minister have not featured housing to any great extent.  It seems the band-width is squeezed such that the potential UK withdrawal from the EU, the national economy and taxation allow little air-time for housing.

Also referred to as an ‘Accelerated Planning Green Paper’ it can only be hoped that Government time can be freed-up to ensure consultation and delivery in a timely manner.  The irony of a potentially delayed publication for an initiative intended to reduce delays in the planning process is not lost on keen watchers of Government policy.

At the more local level of planning, being neighbourhood planning often at a parish level, there are many leaders who are motivated and increasingly well-resourced to plan for development. There are some Local Plans which positively encourage this through delegation on decision-making on the scale and location of new development. This can often be a difficult process for those involved in neighbourhood planning and the ultimate site selection process.

The leadership campaign for planning for housing development needs more standard-bearers working together across the house building sector and all levels of government if the housing crisis is to emerge from the shadow of the wider policy agenda.

David Bainbridge, MRTPI, Partner, Planning at Bidwells, has 20 years’ planning experience. He has successfully delivered planning permission and land allocations for residential, industrial, leisure and mixed-use developments. David is a former Chair of the East Midlands Royal Town Planning Institute, having qualified in 1999.