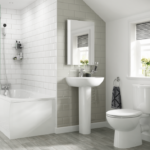 The importance of additional bathrooms

Will increasing the number of bathrooms in a home add value to a property? The latest research from The Bathroom Showroom suggests it does.

British house hunters are prioritising properties with additional bathrooms and are willing to pay extra for the privilege, according to new research by The Bathroom Showroom. A significant majority (86%) of those surveyed would be willing to pay more if the property in question came with at least two bathrooms, with one in ten (10%) happy to pay £10K+ per extra bathroom.

Men are particularly keen on having an extra ‘small room’. On average, men would be happy to pay 60% more than women when it comes to securing a new home with multiple bathrooms, with male respondents paying up to £4,400 per additional bathroom. Female respondents said they are only willing to pay up to £2,750.

The survey also revealed that extra bathrooms are also more sought-after by younger generations, with the vast majority (95%) of 25-34s willing to pay more for an extra bathroom versus 77% of over 65s.

When it comes to specific features, an en-suite bathroom off the master bedroom is the most popular choice, with almost half of house hunters involved in the research (42%) selecting this as one of their key requirements when choosing a new home.  In second place was a separate bath and shower, with 41% stating this is a priority when searching for a new home.

Generational differences
The research also indicates that there is a clear split in priorities between the younger and older generations when it comes to their bathroom choices, with those aged 45 and older prioritising an en-suite in the master bedroom (51%), while 18–44-year-olds prefer a separate bath and shower (43%).

Tech savvy
Having a bathroom with the latest technology is also of interest for some house hunters, with 12% are looking for a TV in the bathroom and one in ten hoping for an electric smart toilet in their new home.

Parv Sangera, Managing Director at The Bathroom Showroom said:  “It is clear from our research that additional bathrooms will be a priority for many house hunters in 2021, however it was interesting to see how favourite features vary by generation and gender.”