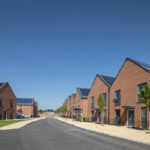 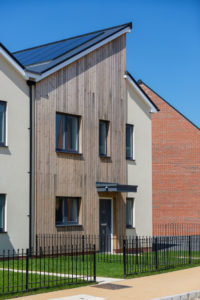 As a new decade begins amidst a tide of new resolutions, it’s worth remembering that unlike fast fashion and interior décor, architecture is slower to change, evolving with each new generation. Look around the villages, towns and cities of the UK and it’s easy to pinpoint housing and buildings from certain eras – whether that’s a prominent Victorian villa, a solid, reliable pair of 1930s semis or an open-plan, detached 1960s house, complete with flat-roof garage.

For architecture, the middle of the 20th century was the age of change. Homes of the 1960s were ultra-modern on the inside and outside. Formal layouts were overthrown for open plan living; the through dining and living room was a popular fad, and windows became larger, picture windows. By modern standards, houses were bigger, and as the UK population grew more affluent, driveways and garages became a design essential.

Key Considerations
Today, housebuilding style has much more to do with planning consent than trends. How the properties sit within the setting, impact on the surroundings and the quality of life this affords the homeowners, are all factored in. This approach impacts on every aspect of the build – from design and product specification to restrictions on site.

Unlike the mid to late 20th century however, houses are an urgent requirement in the UK, and speed must also be a critical factor in the building process. Timber frame construction balances this need for speed with a desire for different and transformative housing. 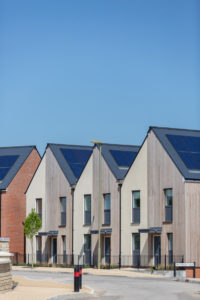 Exemplar Development
An exemplar housing scheme in Bicester, Oxfordshire does exactly that. Elmsbrook, an eco-development by A2 Dominion, takes advantage of the many benefits of building with timber frame and delivers houses for a new generation of homeowners.

Environmental Option
Timber frame construction was the build method of choice due to its environmental credentials, speed of construction and accuracy. As a prime example of contemporary sustainable living, the thermal performance and CO2 cost of timber were also key elements.

Generally considered the most environmentally friendly building material, timber frame has the lowest energy consumption and carbon dioxide emissions when compared to brick, steel and concrete.

Elmsbrook balances health and well-being with a thriving village-style community. The two, three, four and five-bedroom homes benefit from the latest eco-technologies including solar PV panels. There are zero emissions from each property and 40% of the development is open, green space, with community gardens and playing fields.

Variation in Style
One of the most striking aspects of the Bicester development is the variation in housing style. This again, is an inherent benefit of building in timber frame. The timber frame structure can be ‘wrapped’ in a variety of external finishes including traditional brickwork, cladding and render – something that the developer embraced wholeheartedly. 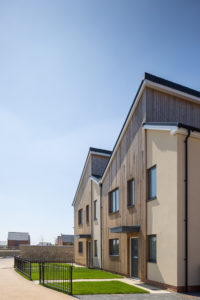 When considering the exterior of the timber frame build, it’s vital that any high-level brickwork is designed out on builds with a step-in level or stepped roof. This is particularly common on semi-detached houses or when there is a single storey adjacent to a dwelling with more storeys. The timber frame cannot bear the load of the high-level brickwork, due to differential movement between the frame and masonry, so a steel frame would be required. This is a costly addition and can cause a thermal bridging issue if not designed in correctly. A lightweight cladding, slip or render system is often chosen as an alternative.

Setting the Standard
While timber frame is a versatile choice, developers can also benefit from standardisation. Setting standard room sizes on similar sized plots is an easy win when designing and building with timber frame. Standardisation generates speed throughout the process, from estimation to design; manufacture to delivery; erection right through to fit-out.

And so, timber frame provides an opportunity to set the standard in more ways than one – regardless of style or finish. We can build houses using modern methods of construction that tick all the social, economic and environmental boxes of a new decade.