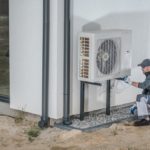 With the residential building industry expected to make huge changes in the way homes are built and heated in the next few years, one company has devised a novel approach to make it work for all parties involved. PHPD caught up with Leigh Goodman from Dynamis to find out more.

When it comes to heating homes in the UK, currently gas is king. However, the long reign at the top is coming to an end – and sooner than many had anticipated – as Government has proposed banning gas boilers in new homes by 2025. This has put the country at a crossroads any many of the difficult decisions facing homeowners and housebuilders alike are still to be answered. From the perspective of the homeowner, installing a low-energy heating system requires a huge initial outlay to build up the insulation necessary and install the considerable equipment needed.

From the perspective of the housebuilder and developer a totally new approach may be needed, one that involves rapidly acquiring new knowledge and skills that are unfamiliar to them. What’s more, the impact of switching from gas to electric goes beyond the four walls of the house itself, and a mass movement towards electricity could have momentous consequences for the country and its power supply. These are distinctly modern problems, and modern problems require modern solutions. This is where Dynamis enter the picture.

Not only does the team at Dynamis possess the knowledge needed to facilitate a switch over to heat pumps from gas, but they have brought a whole new approach to the problem at hand. What they essentially propose is to bring the flexibility and assurance of a service approach – such as leasing a car – and apply it to home heating. For the homeowner, this means the OFGEM-approved firm will install the necessary equipment free of charge, removing the cost barrier and leaving homeowners only with lower fuel bills, whilst Dynamis recoup their losses through the Government’s Domestic Renewable Heat Incentive scheme.

For the developer, who won’t benefit directly from the Government’s incentive scheme, Dynamis takes the hassle out of heating. Developers can hand over the heating concerns to the experts, allowing them to install the right units in the right way across all of a developer’s portfolio. More importantly, Dynamis can harness the power of numbers, collecting the data generated by each heat pump installed (regardless of who it was installed for) in order to optimise the performance of each individual unit.

What’s more, heating homes through a service allows the eventual homeowner to save money, as Dynamis is also developing its own proprietary platform that will allow for full remote monitoring and control of all the heat pumps they install – this will provide further savings to the homeowner as the system will be able to switch between tariffs automatically to always provide for best value. It will also be able to automatically notify the team should the pump need repair or maintenance. Having an element of control over large numbers of home heating systems has the added benefit of being able to alleviate high demands on the power grid.

The company has a current full time staff of 30 working out of its main depot in Warrington and plans on hiring more than double that before the end of the year. All the installations are completed by its own trained engineers – in fact there is a training centre based at the Warrington depot. All aspects of an install from its specification and system design all the way through compliance and installation is completed by the team, with no third parties used.

What’s more, the company also maintains its installations for 7 years from date of installation and use only quality heat pumps.

0 0 0 0
Previous : SPONSORED CONTENT | The Common Assessment Standard from CHAS: What you need to know
Next : Baxi Supports Kickstart Scheme