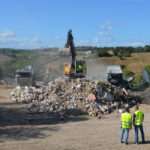 From the machinery involved to the size of the rocks that can be effortlessly reduced to rubble, the crushing and screening industry in the UK is a typically heavy duty affair and one where the American maxim “bigger is better” has traditionally held sway. As with most plant and machinery, size and weight equate to power in the minds of most operators and those in charge of the company cheque book.

Italians, however, do things a little differently and, as they have proven with their cars and their coffee, less is often more. It was Italian manufacturer Komplet’s devotion to compact plant that first attracted the attention of Red Knight 6, a UK machinery dealer specialising in crushing and screening, and we went along together to the firm’s factory in Italy to see the compact wonders for ourselves.

Eschewing the sheer size and weight of traditional crushing and screening plant, Komplet has instead aimed squarely for the smaller end of the industry. Sales Manager, Alan Canestrari explained the company’s ethos: “We want to provide a full solution for customers operating in the compact waste and demolition market.

“We provide everything they need for crushing, screening and conveying material.” You might well wonder what the market is for compact crushers, but of the contractors with us on our journey, the majority of them immediately saw uses for smaller plant. From simply being able to travel more quickly around a quarry to servicing the burgeoning housebuilding sector, there is definitely a Komplet-shaped hole in the UK market.

Red Knight 6 has been selling the grey crushers and screeners in the UK for the past two years, and uptake has been promising – focussing mostly on the ultracompact Lem Track 4825, which can process up to 25 tonnes of material per hour whilst being small enough to be towed by a pickup. The flexibility afforded by such compact dimensions and weight – the Lem Track weighs 3.4 tonnes and is just over 2 metres in length – reflects the company’s origin.

As a response to the earthquakes that ravaged central Italy in the late 1990s, Tonino Filonzi started Komplet, and devoted himself to providing a solution to safely dealing with the concrete and rubble that littered the once idyllic streets and lanes of the small towns involved.

By his own cheerful admittance, the first attempts weren’t great, but as the years progressed – and our trip saw Tonino gleefully celebrate the firm’s 20th birthday with a very large birthday cake – the machines became more refined and powerful, resulting in a variety of crushers for specific applications, along with screeners, conveyors and, most recently, a rotary pulveriser. 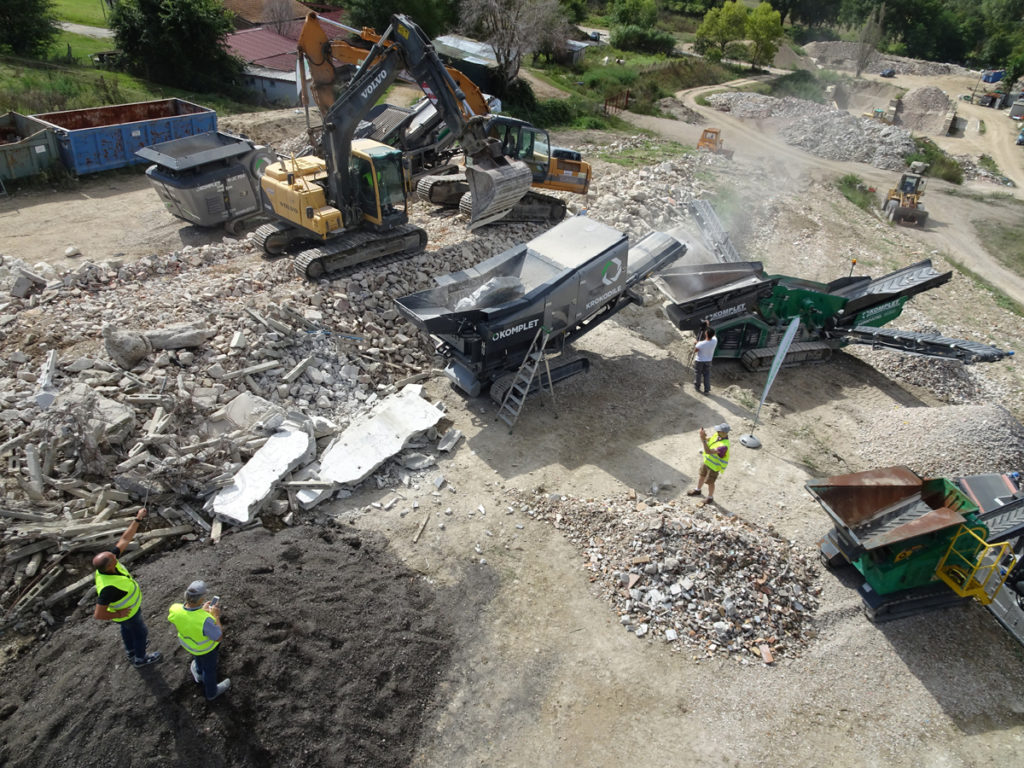 Green Solution
If Komplet’s focus on the wellbeing of the local environment was ahead of its time at its inception, the construction industry across Europe has, 20 years later, finally alerted itself to the power and potential of protecting the planet. Now, everyone from legislators down to customers are falling over themselves in a bid to ‘go green’.

The eco benefits of onsite materials processing are obvious, as you put back into the project the very material you remove from the previous structure, meaning less waste. Less waste leaving your site, and less aggregate being delivered to site means less polluting tipper trucks on our nation’s beleaguered roads.

Of course, there will always be a place for off-site material recycling and the two operate at such different ends of the spectrum that there is little direct competition. Komplet shines on the small jobsite, where the added bonus of reusing the site’s own waste could be a real monetary bonus to the contractor.

Paul Donnelly, MD of Red Knight 6, explains: “We see a real potential in the UK for Komplet. There are a lot of contractors out there who could really benefit from the flexibility and transportability of these great machines. Smaller companies who wouldn’t have been able to benefit from on-site processing before now have that ability.”

It’s not all about compactness and protecting the environment, however. Beneath the grey panels is some seriously powerful engineering. At the quarry site where Komplet was displaying its range, the machine that elicited the biggest response was also the newest – the Krokodile twin shaft rotary pulveriser. At 14 tonnes, it is the biggest unit the company has produced so far and can process a number of different materials, including concrete, wood, metal and fence posts with heavy rebar.

Rather than using simple brute force like a traditional crushers to break down material, the Krokodile utilises two rotating shafts with almighty teeth on them designed to rip their way through virtually anything. We watched in awe as it crunched through tonne after tonne of rebar filled concrete, passing it through to a three-way screener which deposited the material in three neat piles.

A chaotic tangle of concrete and rebar was sorted into piles of reusable aggregate within a matter of minutes. Red Knight 6 Sales Director, Dan Flack told me: “The power involved is what makes these machines really special. They’re compact, yes, but the trade off in size wouldn’t be worth it if the machines were weak. As it stands, it’s incredible that something as small as the Krokodile can produce such results.” Powered by a 160KW/220HP diesel engine, the shredder quite frankly puts its counterpart from the animal kingdom to shame. 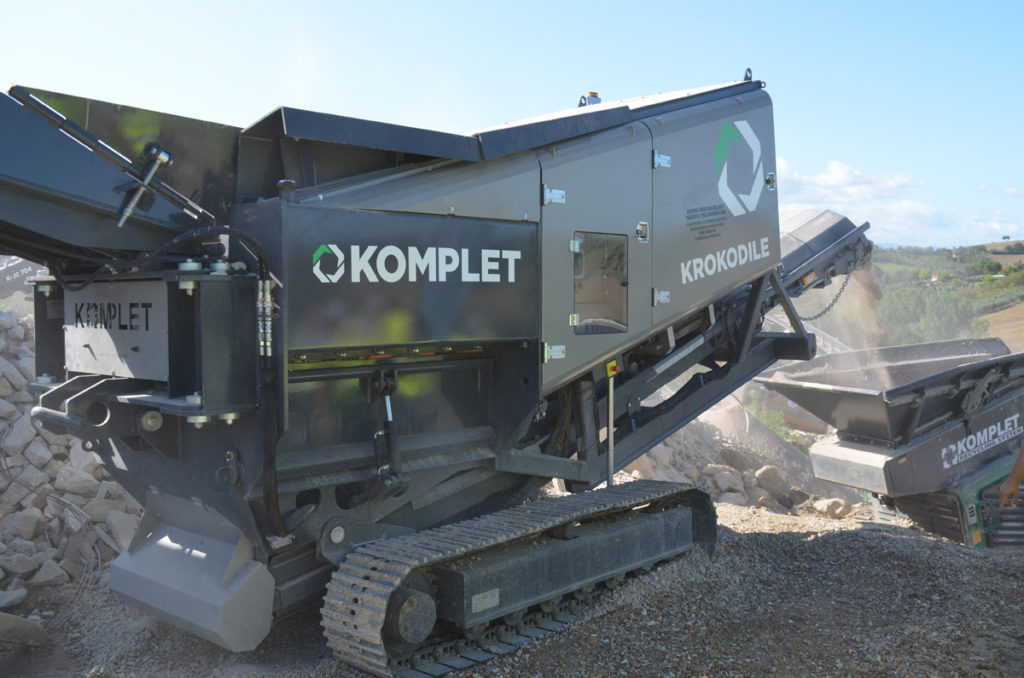 Easily Serviced
Machines bound for demolition sites will face an especially brutal life, so machinery that is easily serviced and repaired is of the utmost importance. Simplicity and ease of operation are central tenets of the Komplet philosophy, and easier servicing and repairs follows on naturally from that, with accessible components at ground level and easily sourced spare parts available.

We visited the factory, which was situated among the gently rolling hills of the Italian countryside, and were shown various units at different stages of production. The calmness of the surrounding landscape extended into the small production line, and as we made our way around, the local workers quietly busied themselves assembling the plant. Owned by brothers Tonino and Paolo Filonzi, the family spirit seems to extend well beyond the boardroom and, indeed, our UK contingency was welcomed, quite literally, with open arms.

Going forward, Red Knight 6’s Paul Donnelly sees a bright future for the two firms: “Komplet understand our needs perfectly and are able to tailor their offering to the UK market. They are at a point now where they are ready to open themselves up and start gaining business across Europe in a serious way.

“We are fully committed to establishing Komplet in the UK and we believe 100 per cent in the potential for these machines and what they can do for the construction and recycling sectors that we are targeting. We wouldn’t be here otherwise.” As the UK building industry comes to rely more on SME contractors to deliver the quality housing the country needs, Red Knight 6 may well find more and more eager customers looking for the ‘Komplet’ solution.

We at PHPD hope that you are coping well with the current circumstances. We understand that COVID-19 has had a huge effect on construction businesses, bringing delays and financial repercussions to owners and workers alike.

We’ve heard from the politicians and now we want to hear from you.

Tell us how this pandemic has affected you and your business and we will share your story. Email us at phpd@hamerville.co.uk or tweet us at @phpdonline