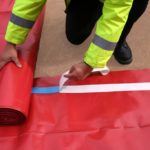 Nik Ullfors, National Technical Manager for Visqueen, explains the dangers of Radon gas and how they can be minimised.

Despite being unfamiliar to some, radon is the single biggest source of radiation exposure to the UK population in both homes and workplaces – and even more concerning is that its the second leading cause of lung cancer after tobacco smoking.

Radon gas is created when natural radioactive uranium slowly decays in the ground and seeps to the surface. Although it escapes from the Earth’s surface constantly and is considered harmless in open air, it becomes a serious issue when it has nowhere to escape in homes, which can happen in areas where geological conditions produce it in higher concentrations.

Radon can be drawn into buildings through gaps in the ground floor and, when trapped, can build to high levels, risking health with prolonged exposure. The amount a building can be exposed to is dependent on a number of factors; the design of the building, what is covering the foundations, how people live in it, and what ventilation exists.

Every building contains the gas to some degree, but the areas with the highest concentration levels in the UK are the south-west of England, the Yorkshire Dales and Wales. However, there are many other affected locations including Milton Keynes, Nottingham, Lincoln, the Peak District, much of Northern Ireland, the southern border of Scotland and Aberdeenshire.

Like carbon monoxide, we can’t see, smell or taste radon. When you combine this with the fact that the ill effects of the dangerous gas are a result of decades of high exposure, it is easy to see why the threat can be easy to ignore or go completely unnoticed. 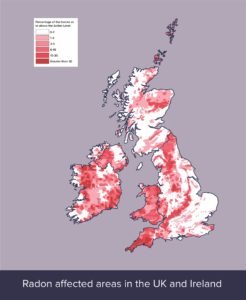 Risk level
The amount of radon is measured in becquerels per cubic metre of air (Bq m3). The average radon in UK homes is only 20 Bq m3, however this still gives the UK population half its exposure to radiation from all sources. For levels below 100 Bq m3, individual risk remains relatively low and not a cause for concern, but the risk increases as the level increases. In addition, the risk from radon is higher if the person is an ex-smoker and significantly greater for current smokers.

New builds
Since 1999, standards have been introduced into the UK Building Regulations to ensure new build properties in Radon Affected Areas (RAAs) have radon protection included at the time of construction. The regulations specify that all new homes should be designed and built with a combined radon-proof/damp-proof membrane.

Current regulations require a suitable radon-proof membrane, of 300µm thickness polythene or equivalent, to be used as combined radon-protection and damp-course in new-build houses in RAAs. For example, the Visqueen Radon Membrane is manufactured from an enhanced blend of polymer films that not only is suitable in the protection of buildings from the ingress of the gas, but also acts as a damp proof membrane.

In addition, further measures are required when developing properties in high concentration areas where more than 10% of existing houses have been found with raised levels. In this instance a sump is required to ensure future pumped extraction of gas can be carried out should post-construction testing of the property indicate higher than anticipated radon levels.

A radon sump is a small void, about the size of a bucket, constructed beneath a floor slab. Typically formed using a prefabricated sump unit, the sump is linked to the outside of the building by a length of pipe that is then capped. If an elevated radon level is measured on completion of the building, the cap can be removed and a fan attached to reduce radon levels.

Although it is not specified in the UK, Public Health England recommends that radon levels in new houses in RAAs be tested in the first year of occupation.

Radon levels can vary over time. This is usually because of changes to the construction of the building or alterations to heating and ventilation that can be caused by a change in use. Therefore, it is imperative that the relevant testing is completed and the correct solution is installed at the earliest point of construction to ensure the protection of the building and its occupants for the lifetime of the structure.

0 0 0 0
Previous : Bellway launches new showhome in Wickwar
Next : The ‘smart’ future for showering