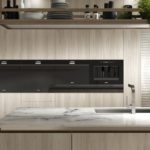 A touch of luxury in the kitchen

For many, kitchens are the most important room in a new home. But how do you bring a touch of luxury to this key space? PHPD caught up with a variety of appliance manufacturers to discover the latest trends and must-have items in the kitchen.

The way in which we use our kitchen has changed considerably over the years. Once a space almost exclusively used for food preparation and cooking, now kitchens are primarily considered places in which to relax, entertain and socialise – with cooking just an element of each activity.

So, when creating a kitchen for a new home, housebuilders must consider a huge number of varied influences. However, top of the list of considerations remain the major appliances to be specified – perhaps primarily because of the strong consumer brand awareness these items retain. Many housebuilders also take advantage of brand appreciation, listing the items they have specified in a home’s sales brochure. It is clear that the kitchen appliances specified by a housebuilder play a vital role in a property’s sales potential – adding that important ‘wow factor’ and even making, or breaking, a sale.

While budgets can constrain some kitchen appliance selections, when the focus is on delivering luxury, housebuilders can push the specification farther. But what are consumers really after? For example, is functionality or style of more importance in the kitchen? Helen Haider, Head of Marketing, Fisher & Paykel UK and Ireland, believes each element is vital. She told us: “The technology and appearance of kitchen appliances are of equal importance. On one hand, it is important that we have beautiful kitchens, a place where we can invite guests so that we can entertain and impress. On the other hand, the performance of your appliances must be exceptional.”

Gordon Dawson, Head of Kitchen Retail at AEG has a similar view. He explained: “Consumers in 2019 do not look at technological features and visual aesthetics separately. Fully-functional and aesthetically appealing appliances which help build a stylish kitchen that is energy efficient is all important to today’s consumer.”

Built in
In new-build kitchens appliances will often be built-in. This offers a clean look and helps to create space – a vital commodity in the kitchen. Lucy King, Product Manager at Smeg UK, explained: “Built-in appliances are the ideal solution for the majority of styles as it creates a sleek and streamlined environment, while freeing up plenty of space to enjoy family meals and entertaining. Large, open-plan kitchens are currently a growing trend, where built-in is the best solution.”

A similar view is shared by Gordon Dawson, Head of Kitchen Retail at AEG. He noted: “we’ve seen a shift in how consumers inhabit the spaces they live in, with open plan living becoming a growing trend and in-home entertaining has contributed to the demand for built-in appliances.”

Full steam ahead
When it comes to the appliances themselves it would appear that the oven remains top dog – and steam is the technology that is increasingly sought-after. Max McCormack, Head of Sales – Projects & Marine at Miele GB, told us: “It is almost always the steam oven that customers never realise they want until they see it demonstrated. Once, they have seen it in action and experienced the healthy and nutritious food that can be created, a steam combination oven is always put at the top of the appliance list.”

Steam ovens vaporise water as part of the cooking process which helps to keep both moisture and nutrients in the food being prepared.

Lee Collett, Channel Controller, KitchenAid, explained: “A dedicated steam oven is perfect for preparing dishes that require a combination of cooking methods, such as roasted fish with steamed vegetables. The steam oven is greatly appreciated for the advantages it deliveries to the modern consumer, in particular the health benefits that it brings, as cooking with steam requires no additional oils or fat.”

Lucy King, Product Manager at Smeg UK, also highlighted a growing interest in steam ovens. She noted: “Oven capabilities such as steaming, and the option of Pyrolytic cleaning are both on the rise and are becoming standard appliance features that many customers now expect.”

The pyrolytic cleaning function reduces the amount of time required to clean an oven by increasing the temperature within the oven to around 400°C which reduces grease and food residue to ash.

Hob won out
Another of the key items in any kitchen is the hob, and the trend appears to be towards induction models. Combined with downdraft extraction – which removes the need for an over hob extraction hood – it is an option which could be of particular interest to housebuilders looking to de-clutter a kitchen and provide a minimalist layout.

Game, set and match
One common trend in the luxury kitchen is to ensure all appliances come from a single manufacturer – and often a single range. This continuity of design adds to the overall visual style of a kitchen, which in an open plan layout is vital. Helen Haider, Head of Marketing, Fisher & Paykel UK and Ireland noted: “According to global market research firm IPSOS, 67% of people want stylish appliances that match. This is partly down to our move to an open plan layout and also because when you are investing in a premium product looks really do matter.”

Fisher & Paykel has recently introduced a suite of black appliances which includes ovens, fridges and the brand’s well-known DishDrawer™. The new fully black oven gives the option to blend fully into the background of an open plan kitchen while contrasting materials, cabinetry and design touches take centre stage.

Connect more
As the world around us becomes ‘smarter’ it should be of little surprise that kitchen appliances are also becoming more connected. For some house buyers ‘smart’ appliances could be a particularly appealing feature.

Lucy King, Product Manager at Smeg UK explained: “A key growing trend within the home appliance market that is driving sales is smart home integration. Many of our built-in products work with SmegConnect. This smart app allows customers to connect their Smeg household appliances and control them via a smartphone or tablet. For example, if you want your wine to be chilled when you get home after a long day at work, you can control the temperate of your wine cooler from the app and come home to a perfectly chilled beverage.”

Peter Wadsworth, Innovations Manager, BSH Home Appliances Ltd – the company behind brands such as Siemens, Neff and Bosch – told us: “The majority of our premium appliances offer connectivity. At the moment it’s the refurbishment market rather than the newbuild that is driving connected appliance sales. We expect this to balance out when the technology rolls out across the entire range, making it available at all price points.” He continued: “Ovens, laundry and dishwashers are the most popular connected appliances.”

As part of its solution the company has a Home Connect app, which provides a recipe feature that allows a user to transfer the recipe settings at key stages during the cooking process. It also gives remote control, for example, preheating the oven on the way home from work, which can be done directly from an app or when you reach a predetermined distance from your home.

Peter outlined the potential in this market: “The most recent research suggests that there are as many as 15 million smart homes in the UK and that number will continue to grow.”

Speak up
Another growing trend could be voice activation. Max McCormack, Head of Sales – Projects & Marine at Miele GB told us: “Key trends coming through include appliances with intuitive touch screen controls that can also be voice activated by Alexa or from an app on a mobile phone.”

As voice control is increasingly available in other areas of the home, it is logical that it would become more widely used in the kitchen too.

Peter Wadsworth, Innovations Manager, BSH Home Appliances Ltd noted: “Voice control seems to be an extremely popular feature, almost certainly because consumers already understand the benefits from other devices. Think about how many times you’ve needed to make an adjustment to your oven while your hands are covered in whatever it is that you’re preparing in the kitchen — voice control is a simple solution to that problem.”

Getting the specification of the kitchen appliances right will go a long way towards the creation of an aspirational home which is alluring to potential buyers. The choices available in this area are numerous, but perhaps one thing, above all others, is clear: both design and technology must be integrated to create a luxury kitchen. As Gordon Dawson, Head of Kitchen Retail at AEG noted: “Consumers are demanding appliances that are bolstered with technology, are easy to use and look good situated within their kitchen. Rarely is a consumer satisfied with an appliance that is technological adept but is visually unpleasing.”

0 0 0 0
Previous : Developments #28 | Updates on projects across the UK
Next : Digital showers desired in Bathrooms