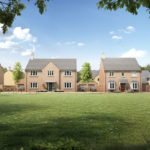 The huge sums cited as the economic benefits and social value of housing developments are impressive. But developers are still often seen negatively, and resistance to the building of new homes is the norm. Breaking down the headline financial figures into tangible and locally targeted benefits stands to create greater understanding between developers and stakeholders.

Using calculations from Knight Frank’s investigation on behalf of the Home Builders Federation (HBF), we can put a figure of over £83,000,000 on the economic benefits of the 500 homes that Lincolnshire based, Larkfleet Group stands to deliver this year.

However, John Anderson, CEO of The Larkfleet Group believes focusing on this headline figure is a missed opportunity: “It’s a great figure, one to be proud of, but communications about the social value of housing and developments should be more than an eye-catching headline. Without greater transparency of what contributes to that topline figure, people in the towns and villages in which we build our homes will feel detached from it.

“Breaking the figure down into the number of jobs that will be created (1,536) or the contribution that will go towards supporting education and other services (almost £2,500,000) has far greater resonance with communities.”

Interrogating the figures still further, to a site level, and translating it into tangible benefits, would allow developers to connect with decision makers and residents. Giving them the opportunity to address directly some of the concerns around a new development.

John continues: “For example, Abbey Park, our 91-home development in Thorney near Peterborough, will deliver 27 affordable homes, 284 jobs and a £2,396,875 spend in local shops and businesses. Alongside this, the planting of 200 trees, the creation of 7,631 Sqm of public open space and the laying of 2,000 Sqm of turf, not to mention the 10 bat boxes that will be installed, all create a more relatable image of the new community and a better understanding of the economic and social benefits of the development.

“Developers are often seen as the bad guys, but by digging a little deeper and being a little clearer about the economic benefits of housebuilding maybe we can start to change the conversation?” he concludes.