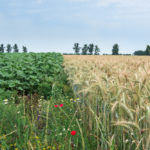 Green gains can profit everyone

Nick Mann, owner of Habitat Aid, explores the issue of biodiversity loss and suggests some ways developers can enhance habitats to the benefit of all.

In fact, 138 green companies, government organisations and NGOs were there. How many were principally involved in reversing biodiversity loss? Two. The green folk around my table, admittedly late in the evening, struggled to even define it (in this context, by the way, it’s “the local reduction or loss of species in a certain habitat”).

I wasn’t surprised. For such a big and pressing issue, biodiversity loss has attracted remarkably little attention. When it has, headlines like ‘Ecological Apocalypse’ make us want to hide under the table, rather than tackling it in practical terms. I’m not going to tell you it’s an ‘apocalypse’, but it is bad out there. I won’t run you through the numbers as they’ll just depress you. My particular interest is insects, and although some species are doing well, or are seemingly stable, most continue to really struggle. Some are close to extinction in the UK.

Gain from biodiversity
We can do something about this – rather than just shutting our eyes and putting our hands over our ears. What? There are many things affecting our wildlife, including climate change, but number one has been destruction and fragmentation of natural habitat. The biggest driver of that has been our use of the ‘countryside’ – whatever that is – which isn’t my subject here.

The built environment can provide at least some compensation for that degradation. There are of course BREEAM credits for enhancing site ecology. Neighbourhood plans include environmental elements. At the time of writing, DEFRA is consulting on proposals for builders to produce a net GAIN in biodiversity from developments.

I’m not sure about this kind of offsetting regulation, not least because it’s impossible to measure and potentially encourages abuse. I’m more a fan of creating economic value from enhancing people’s environment. This isn’t just a question of benefitting from the kind of positive PR that partnering with conservation NGOs on individual projects brings. It’s a more tangible return.

These enhancements evidently improve people’s wellbeing, but also the financial value of any property. They can combine aesthetic appeal and easy maintenance, while attracting engaging wildlife. They will pay for themselves many times over.

These economic returns will continue to rise as the natural world outside our own back doors does – finally – command the interest and concern it deserves.