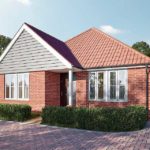 The bungalow has long been the home of choice for older generations looking to downsize in retirement. But now it seems that younger house hunters are also beginning to recognise the benefits of single-storey living.

Vistry Eastern, part of the Vistry Group which builds homes under Bovis Homes and Linden Homes, has noticed a growing demand for bungalows in recent times – and not just from older downsizers.

“The bungalow is fast becoming the choice of more and more homebuyers and we are not just talking about the more mature generation,” said Jason Colmer, sales and marketing director for Vistry Eastern, which has developments in Essex, Suffolk, Norfolk, Hertfordshire and Cambridgeshire.

“They are ideal for people with mobility issues who find tackling stairs a struggle, as well as families who find that living on one level is much more convenient and safer. Parents can keep an eye on their young ones far more easily, while bungalows are easier to clean and cheaper to keep warm than their two-storey counterparts.”

The design of bungalows also offers other advantages, both indoors and outdoors.

“In a lot of cases, bungalows are detached and come with extra space outside to accommodate the wider floor plans which means a bigger garden and a greater feeling of privacy,” Jason said.

“The outdoor space is complemented by the more efficient use of square footage and vertical space inside the property. The combination of the open sight lines and increased natural light makes the home feel larger.”

Jason also believes that there is a growing market specifically for new-build bungalows.

“Greater convenience, lower maintenance costs and higher energy efficiency are among the main reasons for buying a bungalow rather than a two-storey property. These are all benefits associated with new-build homes in general, so it’s easy to see why those in the market for a bungalow might opt to buy new.

“Most of our bungalows feature contemporary open-plan layouts similar to those in our two and three-storey homes. This arrangement of light, bright spaces which are distinct yet flow easily between each other is perfect for modern lifestyles and therefore appeals to buyers across the age spectrum.”

“Bungalows are already becoming an increasingly significant part of the housing mix at our developments and it’s very likely that this trend will continue into the future”, said Jason.

“With an ageing population and a growing appetite for single-storey living among younger people, the demand for bungalows is only going to get bigger.”

For more information about developments being built by Linden Homes and Bovis Homes in Essex, Suffolk, Norfolk, Hertfordshire and Cambridgeshire, visit lindenhomes.co.uk/eastern or bovishomes.co.uk