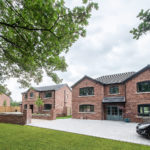 It is well documented that there is a housing shortage in the UK. While much of the demand will be met by major developers, there’s also an important market for smaller projects. Builders and developers are looking afresh at existing communities and identifying new areas for development – from former industrial sites in cities, to gardens and fields in villages and towns. But whatever is built on in-fill sites has to meet relevant criteria and be acceptable to planners, conservation officers and neighbours. That’s why handmade bricks are increasingly in demand.

Handmade bricks are suited for smaller, niche developments. In constant use since the earliest recorded civilisations, they become part of the identity of an area. Variations in colour, size, finish and mortar around the country distinguish one region from the next.

For such a small country we have a wealth of colours and designs to choose from. If you were dropped into any area of the UK, you’d be able to have a good guess at your location based on the colour and style of the bricks: Yellow Stock in London, soft reds in the south, buffs in Oxford and Cambridge and plums and oranges in Cheshire – they are all distinctive.

Planning and conservation officers have strong views on what is acceptable, as do potential buyers. New homes on small developments need to relate well to their surroundings. Whether it’s an old industrial site to be developed for housing, a conversion of existing buildings or new build, it’s important the new elements fit in seamlessly.

To avoid planning delays developers have to start by choosing the right materials. Choosing the right supplier is vital – it’s not just about the range and quality of products, although that is obviously important – it’s also about the service. Handmade bricks are available in a whole breadth of colours and finishes, but your supplier should be able to offer expert advice on what’s right for a particular region, period and style, and offer samples and onsite visits. If there isn’t a perfect match from stock, bespoke bricks or blends can be created. And if the new bricks still aren’t quite right onsite ‘tinting’ or ‘weathering’ solutions can be applied.

Size is another factor. Using the wrong size bricks, particularly for an extension to an older building, leaves the passer-by with a sense of ‘something not quite right’. Pre-1965 bricks were usually made to imperial measures, although even this varies across the UK. In the North and Midlands 3” bricks were common while in the south the ‘standard’ brick is slightly smaller.

It’s important to use imperial-sizing when working on an existing building – but for new build it may be more convenient to use metric sizes, to fit with modern blocks and lintels. It depends on the location and project requirements.

The right kind of brick

Moray Mews in London is a development of eight contemporary courtyard houses located on a narrow site, formerly waste ground. A row of two-storey mews-style houses was added to the existing buildings, which had been a stable and coach house serving the surrounding houses. Using new, handmade 65mm reclamation-style Yellow Stock bricks from Imperial Bricks instantly gave the new buildings an established appearance, setting the development into its urban context and blending into the existing area. The design of the homes is modern, but it fits in happily with the original Victorian buildings.

In contrast, a project in Cheshire by developer Lockwood Homes shows how handmade bricks are perfect for a completely new build in a village setting. Three four- and five-bedroom executive homes were built in Holmes Chapel using handmade metric-sized reclamation-style bricks, in a mellow soft red. The new homes blend in with the traditional Cheshire cottages nearby. Builder Paul Lockwood said: “The handmade bricks help us stand out and distinguish us, and the development, from mainstream housebuilders working in the same area.”

Bricks are a timeless product. They’re still one of the most durable, versatile and stylish construction materials around and you can be sure, whatever the style and budget of your project, there’s a suitable brick.