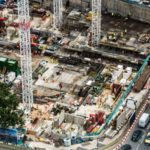 Bridge Insurance Brokers | The situation on the ground

Environmental Land Laws have been updated recently and this is something developers need to be aware of, advises Carrie Arnold of Bridge Insurance Brokers.

UK cities are growing at an incredible pace.

To use the example of Manchester, where we are based, there is now a population of almost three million people; it is the third largest economy in the UK and the third most visited city, after London and Edinburgh. A thriving economy is reflected in the property, construction and development sector here in Manchester – there are currently almost 20,000 homes under development, over 2 million sq. feet of office space under construction (that’s a y/o/y increase of 50%) and seven skyscraper proposals in the pipeline.

While many of these developments are on the sites of existing buildings, a quick tram journey in any direction from the city centre shows the spread of residential developments. As the city centre runs out of space, developers are looking to expand and make the most of the outskirts of the city. This is a natural development, true of most UK cities, where we are seeing swathes of unused old industrial land sites being changed beyond recognition, creating desirable living quarters, welcoming new tenants and homeowners and reinvigorating entire neighbourhoods.

It does come with its challenges however. These sites have a backstory – many of them were used for manufacturing or industrial businesses, bringing with them a whole host of different risks to city centre locations and beyond. One such risk which is becoming more prolific is historic pollution. Often assumed to be the onus of manufacturing, chemical or waste industries, historic pollution is now something that needs to be at the forefront of developers’ minds, as they excavate and develop land for building.

This pollution can come in several forms. It may be buried waste, leaking oil, gas, arsenic – often not immediately evident – and with a network of waterways running through cities like Manchester and Birmingham, the problem is not limited to the soil as it can be transported into ground water resources which may be used for drinking purposes.

Because of the recent changes in the laws, the Environment Agency has become a lot more proactive and on spot site checks are increasing. If these checks are okay then building can begin. However, evidence of pollution will lead to more detailed geotechnical checks, which can hold up the development and lead to the investigation of further contaminants, which are often released when the earth or surrounding area has been disrupted for development. Excavated material can be transported off-site by heavy rain which is a key feature of the weather experienced in Britain last year.

It may be assumed that this is the responsibility of the original polluter, but in many instances, that polluter has long since died, cannot be found, or has gone into liquidation. In this instance, it is the landowning developer who has to deal with the clean-up costs, compensatory damages and complementary remediation as opposed to the traditional fines and penalties.

Most developers don’t have Environment Impairment Liability (EIL) but this is something that needs to be looked at, as the days of relying on the principal of ‘polluter pays’ are over. The law now holds the developer or contractor responsible – after all, it is they who have brought the issue to the surface.

An EIL Policy protects the buyer from potential claims arising during the policy period from contamination beneath the site. This can include discovery by an adjacent landowner of contamination which has migrated off-site, sudden and accidental and gradual pollution conditions, on-site and off-site third parties and clean up and claims from third parties and claims from regulators (independent of one another).

As policies can be arranged for periods of up to ten years, future owners can be added to the policy, making site purchases more attractive.

As we migrate into the suburbs of our cities and transform our neglected sites into developments fit for the future, we need to make sure we are considering the past when we start the planning.