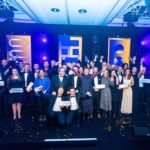 PHPD attended the 2019 Brick Awards, held in London recently. Here is a selection of some of the biggest winners on the night.

As modern methods of construction and modular housebuilding in particular gain ever more prominence in the housebuilding sector, it’s worth reminding developers and builders of the potential that building in brick still has to produce outstanding results. The 2019 Brick Awards, the 43rd annual event of its kind, provided the perfect opportunity. Organised by the Brick Development Association, the awards celebrate the best projects built in brick, highlighting just how versatile a material it continues to be.

Head Judge, Hilary Satchwell, Director at Tibbalds Planning and Urban Design, commented: “What is so delightful about the winners of this year’s Brick awards is the way they show us what well considered design, robust brick detailing and careful delivery can do for our towns and cities and for all those who live in them. The list of winners present a range of serious buildings that challenge bland and uninteresting buildings everywhere and demonstrate what best practice looks like.”

This year’s title of Supreme Winner has been awarded to the Dorothy Garrod Building, Newnham College at the University of Cambridge. Designed by Walters & Cohen Architects, the project also took home the Medium Housing Development and Craftmanship categories. Another big winner on the night was the Interlock, which won the Small Housing Development, Innovation and Architect’s Choice awards.