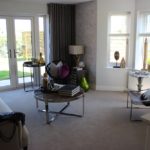 Developer Walton Homes has unveiled the show-home at its latest development in the heart of the Derbyshire countryside.

As Ferrers Chase was officially launched in Linton Heath, Walton Homes threw open the doors to its show-house – a four-bedroomed Elmsdale house type.

Located on the outskirts of the National Forest’s Foxley Wood, Ferrers Chase is a collection of 26 three- and four-bedroom homes, surrounded by 29 hectares of woodland.

Sarah Summerton, Director, said: “We were extremely pleased with how the Ferrers Chase launch went – we had a good attendance and the showhouse was very well received. The property we selected to use as the demonstration was the Elmsdale house-type, a four-bedroom, detached home which demonstrates perfectly the build quality and internal specifications that buyers can expect.”

She continued: “Visitors were impressed with the size of the house – particularly the rooms downstairs, where there is a separate sitting room and then a huge open-plan kitchen/dining/lounging area which forms a hub for the whole family.”

“As always, we were careful to furnish the home to show buyers the potential for the property, with rich, elegant and welcoming jewel tones downstairs and a cool kids’ room that the fussiest of children would be sure to settle straight into,” she added.

Sarah said that each of the nine house-types will combine the same spacious, high-specification interiors demonstrated within the showhouse, while the exteriors have been designed to complement the setting that surrounds them.