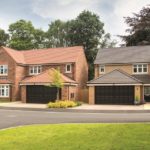 A duo of successful land deals will see 233 new homes built by housebuilders in Yorkshire and Wiltshire.

Two regional house builders at either end of the country are celebrating simultaneous deals with Ainscough Strategic Land that will see 233 new homes built in attractive village settings.

Harron Homes Leeds has acquired a fully-consented site in the East Yorkshire village of Carlton for 133 new homes, whilst Wiltshire developer Backhouse has acquired a site with outline planning permission for 100 new homes in the Swindon commuter village of Blunsdon.

“We were delighted to get both deals over the line on the same day and once again to deliver high quality sites to the UK’s housing sector,” said John Brooks, director of planning at Leigh-based Ainscough.

“We’re on an ambitious growth curve and have 20 sites in our pipeline, with an appetite for many more,” added Brooks.

Both deals were made possible after the land owners had entered into a land promotion agreement with Ainscough, which incurs all costs and risk associated with managing a site through the planning process.  On successful disposal of a consented site its costs are met along with a proportion of the sale fee.