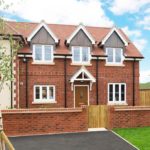 Bewley Homes’ third collection of homes in Hampshire has been named Canterbury Gardens, in honour of an Oakley-born Archbishop who served during the reign of Henry VII and VIII.

Canterbury Gardens in Park Farm, which is likely to be launched early next year, will comprise homes of between two- and five-bedrooms. Dedicated open spaces and play areas for children have been included in the plans.

The development has been given its name in recognition of the achievements of William Warham, who was born in Oakley in around 1450. His family had lived in the area for several generations.

Educated at Winchester College and New College in Oxford, Warham practised law before taking holy orders. He took the important legal position of Master of the Rolls in 1494, was consecrated as Bishop of London in 1502 and became both Lord Chancellor and Archbishop of Canterbury in 1504. In 1506, he became chancellor of Oxford University, while he was a key diplomatic adviser to King Henry VII.

Bewley Homes’ Sales and Marketing Director Elaine Stratford said: “William Warham was a pre-eminent figure in the Tudor period, rising to truly lofty heights in his chosen fields of the law and the church. Canterbury Gardens was an ideal choice of name for our new development to mark Oakley’s connection with this fascinating history.”

Founded in 1991, independent developer Bewley Homes currently has 11 sites across Berkshire, Gloucestershire, Hampshire, Oxfordshire and Surrey. Canterbury Gardens is one of four further developments to be launched in the next year.