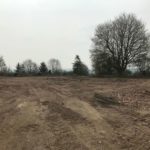 The Warwickshire-based firm is seeking full planning approval for 19 aspirational homes on a 10-acre plot at Bosworth Road, Wellsborough, near Market Bosworth.

It was originally the location of the former Hornsey Rise Care Home, which first opened in 1921 but closed down in 2012 and has now been demolished.

Springbourne’s Managing Director Adrian Burr oversaw the demolition and said afterwards: “In some ways it was sad to see this old building come down because there is nearly 100 years of history and heritage attached to it. Demolition is the first step towards transforming this blighted site into a stylish, new development that I believe will be a real boost and asset for the area.”

Springbourne, whose headquarters are in Coton Road, Nuneaton, has already been granted outline planning permission by Hinckley and Bosworth Borough Council and has now submitted detailed plans of the homes and the lay-out of the development for final approval.

It’s hoped that Phase One of the project will begin later this spring with the new homes going on sale soon afterwards.

Adrian added: “We have already received a lot of interest in this development because it is in such an enviable position in the heart of the countryside. Our aim is to deliver homes as stunning as the location and we are working closely with Hinckley and Bosworth Borough Council to deliver something truly special.”

The old convalescent home opened in 1921 as the Natsopa Memorial Home in honour of members of the now-defunct Natsopa trade union who lost their lives in World War One. The home cared for retired or injured members and their wives.

In 1974 the site was taken over by Pilgrim Homes who cared for elderly Christians there until the home closed for good in 2012.

Springbourne intend to pay homage to the heritage of the site by naming the new development – Hornsey Rise.