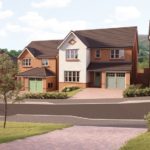 Just a month after work started on site at two North Wales housing developments, sales are due to officially launch soon. Cysgod Y Graig in Dyserth and Parc Tirionfa in Rhuddlan, are being developed by St Asaph-based Macbryde Homes. Between them the two sites will provide over 100 new homes ranging between two- and four-bedrooms.

Sales at the Dyserth site will launch this weekend (July 26), with the launch at Rhuddlan following later in August.

Before work had even commenced on either site, Macbryde Homes had received over 200 enquiries from interested purchasers. This made a quick sales launch all the more important, as Gwyn Jones, Managing Director at Macbryde Homes, explained: “Both of these sites had already been identified as locations for residential development and with a steady flow of enquiries from a wide range of interested purchasers, we were keen to enable those enquiries to convert to sales as soon as possible.

“We’ve made no secret of just how needed affordable quality homes are in this part of Wales and so we’re delighted to quickly mark this important milestone at two much-needed developments.”

Help to Buy Wales is available on properties at both sites. Show homes will follow at both Cysgod Y Graig in Dyserth and at Parc Tirionfa in Rhuddlan in Spring 2020.

0 0 0 0
Previous : Aster Group to deliver 90 affordable homes in Dorset
Next : Developments #22 | Updates on projects across the UK