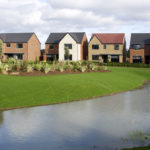 Newcastle-based builder Bellway has been granted planning permission to build 75 new homes on the site of a former covered reservoir in North Shields.

The homes will be located on the eight-acre Moorhouses covered reservoir and pumping station site off Billy Mill Lane, North Shields. A new entrance road into the development off Whitehouse Lane will also be created.

Plans for Bellway’s scheme, on two adjoining square-shaped parcels of land, were submitted to North Tyneside Council in September, and construction work is set to begin in the coming weeks following the completion of initial demolition work on the former reservoir site.

The development will comprise a mix of two, three and four-bedroom houses, including 19 affordable homes of which 13 will be available to rent.

Chris Lawson, Head of Sales in the North East for the five-star builder, said: “We are naturally really pleased to have been given the green light to begin regenerating a site which was disused and becoming an eyesore for local residents.

“The site offers a great opportunity for the creation of much-needed new houses for North Shields, including a proportion of homes designated as affordable housing for local people.

“This would be a considerate and sustainable residential neighbourhood, with an even spread of homes set within attractive landscaped open space.

“The majority of the trees, hedges and woodland copses will be retained as part of the re-development, and those which need to be removed will be replaced with native hedges.”

Of the 75 homes to be built at the site, 22 will be two-bedroom homes, 24 are to become three-bedroom properties and a further 29 homes will be built as four-bedroom homes.

The new development lies 1.5 miles north-west of the town centre, within easy reach of shops, schools, medical facilities and public transport. The A1058 Coast Road lies around 600 metres from the site’s southern boundary and provides regional connections.