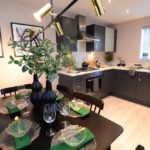 Bellway has announced the launch of two showhomes at its new purpose-built village to the south of Mansfield, Berry Hill.

The four-bedroom ‘Worcester’ and ‘Laurel’ showhomes are two of the 146 homes Bellway is building at the site.

The ground floor features a kitchen / dining room, a living room and a downstairs cloakroom. The first floor features three bedrooms, including two doubles and a family bathroom. The top floor consists of a master bedroom with an en suite.

As for the other showhome, the Laurel, Carolyne said: “It’s a beautiful four-bedroom home with a bay window.”

Downstairs, the Laurel features a bay window to the front-facing living room, a cloakroom and an open-plan kitchen, dining and family area. Upstairs there are four bedrooms, with an en suite to bedroom one, and a contemporary bathroom.

Berry Hill is a development of three- and four-bedroom homes, which forms part of an emerging residential community focused around a village centre.

0 0 0 0
Previous : Show homes open at Bertha Park in Perth
Next : Developments #8 | Updates on projects across the UK