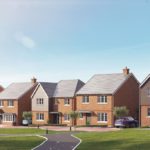 Bellway has welcomed house-hunters to its exclusive Cedarbrook Rise development in Goff’s Oak for the first time.

The housebuilder opened a sales office at the site off Burton Lane in June.

Bellway North London is building 66 new homes at Cedarbrook Rise. There will be 40 new homes for private sale alongside 26 affordable properties available for local people through rent or shared ownership.

Greg Allsop, Sales and Marketing Director for Bellway North London, said: “The launch was just as busy as we expected it to be considering the phenomenal level of interest we have already seen in the new homes at Cedarbrook Rise.

“After more than 2,000 people got in touch with us to register their interest in the development, we took the decision to release the first selection of homes off plan in April. Within an hour of that launch, we had sold the first five new homes.”

Cedarbrook Rise, which is located within a newly formed linear park, will also include public parkland between Burton Lane and Andrew’s Lane, as well as a new pedestrian and cycle path through to Goff’s Oak village.

Greg said: “We are delivering a choice of two, three and four-bedroom properties which are from our flagship Artisan Collection. These are high-quality homes in a range of styles developed from decades of customer feedback which brings together traditional craftsmanship and modern construction techniques.”

A showhome is due to open at the development in the Autumn.