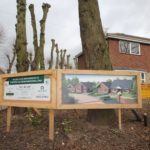 New bungalows to be built by Mallard Homes

150 years since the first bungalow was built in Britain, Mallard Homes is delivering 13 new homes in a multi-million pound scheme in Swadlincote.

“In the mid-1980s, as many as 26,000 new bungalows were being built every year,” said Paul Heap, Founder and Managing Director of Mallard Homes.

“When we started exploring options for this site back in 2017, this figure had fallen to just 2,600 – but we felt there was untapped demand out there, especially in South Derbyshire, and designed a scheme to meet this gap in the market.

“That approach has been borne out by two bungalows already sold off-plan as part of the first phase of the development, and plenty of interest triggered in the others.”

Mr Heap said that rather than being a dying breed of housing, bungalows were once again becoming hot property. “Step-free living holds growing appeal for a wide range of homebuyers who are now turning to bungalows in ever-increasing numbers. It is similar to having a flat except that it’s detached and you have a garden which you would not have with an apartment. What’s more, they are a better layout and shape and there’s much more flexibility with the rooms.”

This year marks the 150th anniversary of the first modern British bungalow, built in Westgate-on-Sea in Kent. The word bungalow dates back to the British Raj meaning “house in the Bengali style” – referring to the one-storey residences that housed British officers and administrators.

The Eureka Lodge Gardens development is being brought to life on the site of the historic villa of the same name. It was bulldozed after standing empty for many years to make way for the detached bungalows.

“By retaining the original gate pillars – a striking part of its heritage – we have been able to create an exclusive sense of arrival as you enter the peace and solitude of this sought-after location,” added Mr Heap.

Mallard Homes reports that building work remains on schedule and the homes that spearhead the first phase of the development should be ready by Spring.