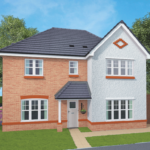 Work is starting on two new North Wales housing developments, just miles from one another, as Macbryde Homes confirms strong levels of interest in the scheme, before spades have even hit the ground.

Macbryde Homes confirmed its plans for new homes in Dyserth in November 2018, whilst it was only in March of this year that planning was granted at the site in Rhuddlan which it had acquired just weeks beforehand.

Gwyn Jones, Managing Director at Macbryde Homes, commented: “The fact that both sites had already been earmarked for residential development, suggests that an acknowledgement existed of the need for quality, affordable family housing in the area. However, what is planned for and strategized is only really meaningful when that translates through in to action. That has most certainly been the case in these two examples.

“Before we’ve even moved in on site, over 200 enquiries have been received from interested purchasers. Interestingly, these are wide ranging enquiries that include local first-time buyers, young professionals, growing families and older couples alike. Both sites are proving equally popular and enquiries are being received for all house types.

“What this confirms is that quality new homes are desperately needed across this part of North Wales for local people and so we’re delighted to now be moving forward with these two developments.”

Sales at both sites are due to launch later this summer.