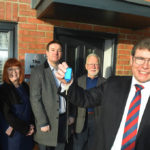 An award winning developer and regeneration specialist is celebrating the completion of the first homes on a brownfield site close to the historic, grade II listed Mowden Hall in Darlington.

Peter Gibson, the town’s new MP and Darlington Borough Council ward members Cllr. Pauline Culley and Cllr. Alan Marshall opened the show homes at Linden Homes’ Hallside, which will be an exclusive development of 30 detached homes – all designed to reflect the surroundings of the hall and the significant amount of mature trees and landscaping.

Peter said: “Hallside is a shining example of what can be achieved through a careful and considered approach to regeneration. By developing unused land in the town, this project is offering stylish news homes in the grounds of a historic hall as well as improving public space.”

The £8.2 million scheme includes a comprehensive landscaping plan with almost 1,700 plants – including 27 new trees – a contribution of over £360,000 towards affordable housing provision elsewhere in Darlington Borough, improvements to pedestrian facilities in nearby Staindrop Road, maintenance of local sports and recreation pitches and a plan for the upkeep of public open space to be created.

Sean Egan, Managing Director with Vistry Partnerships North, of which Linden Homes is the housebuilding division, added: “Although constructing homes is our core business, we are also committed to regeneration and bringing unused or underused sites back to life for the benefit of local communities and this project is a fine example of this policy.

“Hallside has proved extremely popular, with a number of homes already reserved and we are confident that the launch of the show homes will attract more buyers for what is a high quality housing development in a very desirable location.”

Mowden Hall is a red brick Victorian mansion house built in 1862 and added to in the 1870s by the Pease family, in whose ownership it remained until 1928. Marchbank Boarding School was established there in 1935 and it has been the home of other schools and educational operations as well as a war time military base.

The two hectare development site – acquired from Homes England – was last occupied by the Department of Education but the office building was demolished in 2017.

0 0 0 0
Previous : Hyundai enrols in the CESAR Club
Next : Homebuilding & Renovating Awards announce shortlist ahead of final vote on 28 February 2020