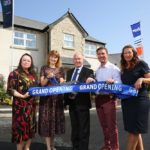 Jones Homes has unveiled its first ever show homes in Kendal – with the first residents to complete on a new home at the development invited to cut the ribbon.

Two show homes have now opened at Stonecross Meadows in Milnthorpe Road, the first development in Cumbria for Jones Homes, which has a 60-year heritage building across the North of England and the South East.

Carol Barlow, Sales Director for Jones Homes, said: “Stonecross Meadows has been extremely well received by people in Kendal. We’re still in the early stages of development but we already feel that we have been welcomed into the community.

“Our first residents are about to move in and there are many more people who have been waiting to see the show homes – but you don’t need to be looking for a new home in order to visit us.”

She added: “We are proud to be different and would like people in Kendal to know more about Jones Homes. The best way to achieve this is to show them around our new homes, so we’d welcome people to come along to the development to find out more about us.”

Stonecross Meadows is a development of 110 homes and as part of its planning agreement, the housebuilder will contribute £279,300 towards education services in Kendal. This is in addition to £32,500 which the company has paid towards road junction improvements linked to the development.

Pictured above is the grand opening of the new show homes at Stonecross Meadows in Kendal, with Jones Homes Regional Director Ralph Bacon (centre) flanked by two of the first residents to move into the development, Debbie and Alan Robertson, and joined by Sales Director Carol Barlow (far left) and Sales Advisor Helen Cleasby.