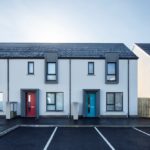 Appointed by Clanmil Housing Association, FORRME has constructed 32 social housing units, made up of a mix of new-build houses, apartments and complex needs bungalows. The development has been designed to bring together clever space optimisation, while retaining a sense of space and community with surrounding landscape design and multi-use green spaces.

Commenting on the project, FORRME’s MD, Mark Currie said, “We are especially proud of the Dromore Street Housing Development which has been constructed to Lifetime Homes standard meaning it is a long-term housing solution that will support the local community for decades to come.

“The project is a regeneration success story where a heavily contaminated brownfield site was fully remediated to become an attractive housing commodity for a broad range of residents, ranging from families to the elderly and those in need of disabled-friendly amenities.”

The firm attributes significant success in the social housing sector to increased demand for Design and Build and rapid delivery projects in light of social housing shortage issues. MD, Mark Currie commented: “We are delighted to be working closely with Housing Associations across the island of Ireland to deliver much-needed quality social accommodation.”

FORRME celebrated its 40th anniversary and rebranded from Donaghmore Construction in January 2018. The company’s turnover has increased five-fold since 2014. Staff numbers have risen from 13 to 55.