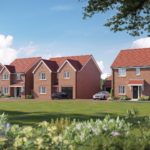 Construction work at Hampton Trove, off Daly Avenue, began in January, with the first homes set to be released for sale in May. Computer-generated images of the homes are now available to view.

The development will consist of 147 properties, including 88 homes for private sale and 59 affordable homes available for local people through rent or shared ownership.

The 17-acre site will feature a mix of one, two, three and four-bedroom houses and bungalows, alongside public open space, a children’s play area and allotments.

Elaine Brown, Head of Sales for Bellway South Midlands, said: “With construction work now progressing well at Hampton Trove, we are looking forward to releasing the first properties for sale this month.

“In the meantime, we’ve released the first computer-generated images of the new homes to give people an idea of what the development will look like.

“Following the launch on site, we are planning to open a showhome in July which will give prospective purchasers an insight into the spacious interior layout of the homes available.

“Our plans are to provide public open spaces, allotments, and a children’s play area within the development, creating a community which will form a seamless extension to Hampton Magna.

“The local area will also benefit from over £1 million in financial contributions made by Bellway, including £454,000 to Aylesford School, £224,000 to improve and extend the number 16 bus service, £169,174 towards local health services and £134,000 as a biodiversity contribution.”

Bellway has also recently supported another local school in the area, Budbrooke Primary School, by supplying new Chromebooks to support the children’s learning.