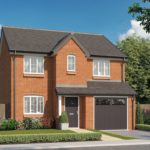 First homes go on sale at new development in Skelton

The first homes were released for sale last month at a new housing development taking shape in Skelton-in-Cleveland.

Bellway is building 140 new three and four-bedroom houses at Castlegate, off Bowland Road, alongside public open space. Funding is also being provided to enhance the play area which neighbours the development.

Castlegate will form the second and final phase of a wider application for 262 new homes in the area, with the first phase already completed.

Hayley Teasdale, Sales Manager for Bellway Durham, said: “We’ve received high levels of interest in this development ever since our plans for the site were approved and since releasing the first selection of properties for sale we have already taken multiple reservations.

“The mix of three and four-bedroom houses we’re providing here has been carefully designed to meet the local housing need, with a variety of styles and sizes to suit a range of buyers.

“The first homes launched online on Thursday 2 December, with a sales centre due to open at Castlegate this month (January) and the showhomes opening in April.

“The market town location of the development is set to be a real draw, while it’s also close to the coast at Saltburn-by-the-Sea, as well as the picturesque countryside of the Cleveland Hills and the North York Moors.”

The new homes at Castlegate are all from Bellway’s flagship Artisan Collection, with homes designed following decades of customer feedback and combining traditional craftsmanship and attention to detail with the latest construction techniques.

Hayley said: “The quality of our Artisan homes is proving popular with customers at other developments, and we are pleased to be able to offer houses from this range at Castlegate.

“Customers buying a new home here will also have the peace of mind that they’re buying from a five-star rated builder with the Home Builders Federation.”

Bellway has been rated a five-star builder by the HBF – which means more than 90 per cent of customers would recommend the housebuilder to a friend or family member – for the past five years running.

More information about the new homes at Castlegate is available at https://www.bellway.co.uk/new-homes/durham/castlegate or by calling the sales team on 01287 236052.