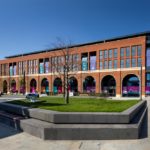 Durkan has announced that the housing element of a major regeneration project in Aylesbury has been completed.

Family owned developer & contractor, Durkan, has announced that the last of the 47 apartments at The Exchange development have now launched, as the wider project opens to the public.

The one- and two-bedroom apartments have been produced as hi-spec homes designed to take advantage of the new public space and restaurants The Exchange provides.

Shane Rooney, Commercial Director, Durkan, said: “The Exchange is a superb development at the heart of an exciting regeneration for Aylesbury. The apartments provided at its centre are vital to this, and we’re delighted to have provided such a key element.

Teresa Lane, Assistant Director for Commercial Property & Regeneration at Aylesbury Vale District Council (AVDC), said: “The Exchange is part of a major town centre regeneration programme for Aylesbury, which focuses on creating new leisure, housing and public spaces in the town centre, reflecting its importance not only as the county town but also as a major housing and growth area.”

Since 2010, Aylesbury Vale District Council has invested over £110m in developing Aylesbury town centre, which now has Garden Town status.