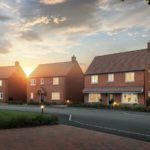 Developments | An update on projects around the UK 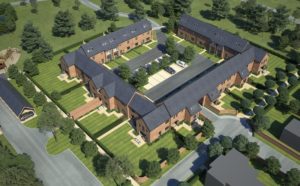 The Grade II Listed Somerford Booths Hall, set within 12 acres of parkland in the heart of the Cheshire countryside, is the location for a new development from PH Homes, which will include 27 homes and restoration of the historic parkland.

The proposed development plans have evolved over the past two years with PH Homes working closely with Historic England and Conservation Officers at Cheshire East council, to create a bespoke design which responds to the sites history, topography and remaining heritage features. Find out more …

Macbryde Homes opened the doors to its first three show homes at its Bron Y Castell site in Abergele recently, with over 100 people visiting the site over just two days. Homes at Bron Y Castell include two-bedroom mews style homes, through to three-bedroom and four-bedroom detached family homes. The three show homes recently launched were The Glastonbury, Wentworth and Banbury house types. Construction on the 156-unit site started ten months ago and the housebuilder anticipates that half the site will shortly be sold or reserved. Find out more…

Enabling works are now underway at a major new housing development by Cala Homes in Penicuik. Proposals from Cala Homes and Avant Homes to build at Mauricewood, to the north of Penicuik, have been unanimously supported by the planning committee of Midlothian Council.

In total, the project will see the creation of 389 detached homes, 20 semi-detached and 39 terraced houses, with a further 44 cottage flats and 52 flats in three-storey blocks. 120 (22%) of the 544 new homes will provide affordable housing.  Find out more… 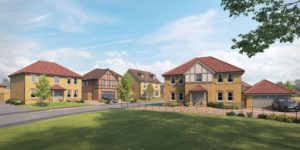 Duchy Homes | Roseberry Park, Hessle, East Yorkshire
The First visuals have now been revealed by Duchy Homes for its new development in Hessle, East Yorkshire. The new development, named Roseberry Park, will include a combination of house designs featuring a mix of three-, four- and five-bedroom bungalows and houses, as well as two-bedroom affordable bungalows being delivered for the East Riding of Yorkshire Council. The new Duchy Homes properties at Roseberry Park will include features such as walk-in wardrobes, bi-fold doors, designer kitchens, AEG appliances and granite work surfaces.  Find out more…

Planning consent has been confirmed for the development of a former disused RAF airfield in Oxfordshire. Hayfield will be injecting a new lease of life into the disused airfield near the village of Stanton Harcourt in Oxfordshire, creating a landmark development of one-, two-, three-, four- & five-bedroom new and restored homes.

A range of house types will be on offer at Hayfield Green, from two-bedroom bungalows to five-bedroom detached family homes, each with spacious gardens and private parking. Hayfield is aiming towards an off-plan launch in April 2019, with a show home opening in the summer. Find out more… 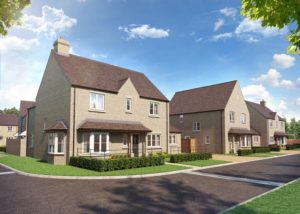 Deanfield Homes has been granted planning permission for its latest development in the Oxfordshire village of Shipton under Wychwood. The site, Deanfield Grange, will feature 44, three-, four- and five-bedroom family homes, built in a traditional style with a high specification.
Pictured is the four-bedroom detached Elstow, which will be available at the development.Work is due to start on site in early Spring with the show home expected to launch in the Autumn. Find out more…
Tags:Avant HomesCala HomesDeanfield HomesDuchy HomesHayfield HomesMacbryde Homesnew developmentPH Homes