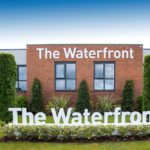 Developments #22 | Updates on projects across the UK

Header Image| The Waterfront at Gloucester Quays, by Crest Nicholson

A range of homes at The Waterfront will feature Crest Nicholson’s new Aurora Open Living design, with undivided living spaces designed to enhance the natural light and air flow throughout the home. The contemporary homes and apartments boast a pared-back interior style, with bespoke Stolz Kitchen designs, integrated appliances and Roca Gap sanitaryware.

The development includes sought-after private parking and secure cycle storage. Externally, The Waterfront apartments have been designed to seamlessly slot in with the industrial heritage of the site, taking inspiration from the red brick warehouses lining the water’s edge. Find out more… 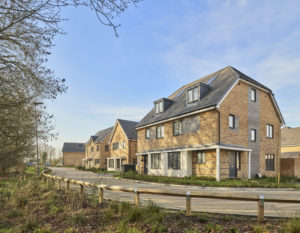 Bellway North London | QEII, Welwyn Garden City
The second phase of work to turn a former hospital in Welwyn Garden City into a new residential community has now got under way. Bellway North London has completed the first stage of construction at its QEII development, located on the old Queen Elizabeth II Hospital site, next to the brand new hospital building. The housebuilder was given planning permission to build a further 41 apartments on the site of the former MRI centre and day nursery building in March.

Greg Allsop, Head of Sales and Marketing for Bellway North London, said: “We are proud to be involved in the regeneration of this landmark site. Bellway at QEII is a high quality development of homes characterised by large, open spaces, providing much-needed new homes in Welwyn Garden City.” Find out more…

Paul Cooke, New Business Director for Thomas Sinden commented: ”Infill schemes have long been part of London’s housing delivery and are an important element of the solution to the UK’s housing crisis. This new development on Bromley High Street will bring much needed high quality affordable homes to the area and make use of a site that has become redundant. We are very pleased to be working with Poplar Harca on this scheme and hope to start on site in the coming months.” 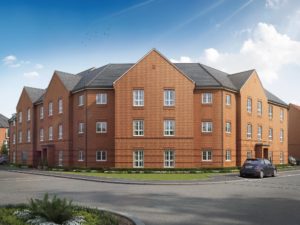 Rob Allen, Sales Director at David Wilson Homes Southern, said: “This development offers a range of one to four bedroom homes perfect for a number of homebuyers with great commuting links and lots of facilities and amenities within walking distance of the homes.”

Located on Pennefather’s Road, Bruneval Gardens is a part of a well-established community. Find out more… 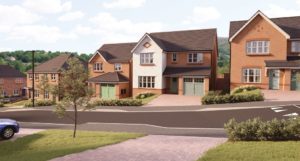 Cysgod Y Graig in Dyserth and Parc Tirionfa in Rhuddlan, are being developed by St Asaph-based Macbryde Homes. Between them the two sites will provide over 100 new homes ranging between two- and four-bedrooms. Sales at the Dyserth site launched on 26th July, with the launch at Rhuddlan to follow later in August.

Before work had even commenced on either site, Macbryde Homes had received over 200 enquiries from interested purchasers. This made a quick sales launch all the more important, as Gwyn Jones, Managing Director at Macbryde Homes, explained: “Both of these sites had already been identified as locations for residential development and with a steady flow of enquiries from a wide range of interested purchasers, we were keen to enable those enquiries to convert to sales as soon as possible.” Find out more…

Annette Gaskell, Sales and Marketing Manager for Deanfield Homes commented: “Demand has been extremely high for the properties at Deanfield Grove and with just a handful of homes still remaining we launched our brand new Elstow Show Home. We were so overwhelmed with the response this weekend that, three of the final four remaining homes were reserved, including the brand new Show Home, so we now only have one four bedroom Fyfield home available.”

The Fyfield features a kitchen/breakfast room with a professionally designed Shaker style kitchen, Quartz work surfaces and built in Bosch appliances, a living room, a separate dining/TV room and a study. Find out more…

The development was secured through a section 106 agreement and will consist of 36 one- and two-bed flats for affordable rent, alongside five two-bed flats and 49 two- and three-bed houses for shared ownership. CG Fry & Son Ltd have been contracted to build the homes.

The first of five shared ownership properties were completed in May and all 90 affordable homes are due to be built by June 2024. The new units will add to Aster’s existing stock in Poundbury of 17 properties, five of which are general needs and 12 are shared ownership.

The project forms part of Aster’s £2bn investment plan which forecasts a build programme of over 10,700 homes during the next seven years. The housing association delivered more than 1,100 homes in 2018/19 through this plan. Find out more…