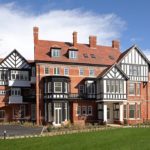 Developer Crest Nicholson has rebuilt the iconic former home of the founder of Cadbury’s at its new Birmingham development, Manor House at Bournville Park.

Using historic records including photographs and drawings of the original property, which date back to the mid-1700s, architects were able to restore the site back to its former glory, seven years after it burnt down.

As a replica of the former home owned by John Cadbury – which was known as Northfield Manor House before it was sold to the University of Birmingham in the 1950s – the development features traditional designs and period elements throughout such as high ceilings, spacious rooms, large bay windows and double patio doors. Manor House now boasts 26 one, two and three bedroom contemporary apartments.

Richard Cowie, Technical Director at Crest Nicholson Midlands, commented: “We worked with conservation officers to recreate the original building to the highest degree of authenticity and the result is stunning. As a former stately home with a large private driveway and a view overlooking beautiful green grounds, the development feels very grand. The layouts of each property have been expertly designed to incorporate the original period features. With a high specification throughout, Manor House offers residents all the benefits of a new build home, whilst also benefiting from the uniqueness and character behind this development.”

Matthew Williams, Director at HGP Architects, said: “With memories of playing in the front garden as children, the Cadbury family was very eager to see the building, and its surroundings, returned to their former glory. To be faithful to the original building, we trawled through historic records, examining old photos of moulding around chimneys and intricate brick detailing, to ensure the building was a true replica. We also sourced traditional tradespeople and materials from across the country to bring this home back to life and keep the legacy alive.”