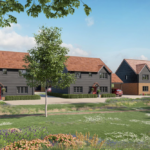 Crest Nicholson has launched a traditional mix of 130 two to five bedroom homes at Henley Gate, its new development in Ipswich, Suffolk.

Situated on the northern edge of town, Henley Gate is the first of three neighbourhoods that will form the Ipswich Garden Suburb (IGS).

Once the masterplan is complete, Henley Gate will comprise 1,100 new homes and include a new primary school, a 30-hectare country park with over 2.7km of walking and cycling routes, and a local centre at the heart of the development.

Karen Coulson, Sales and Marketing Director at Crest Nicholson Eastern, commented: “We are pleased to have launched this traditional collection of houses at Henley Gate, set to be a modern, thriving community, with first residents expected to move in from next summer. Forming an integral part of Ipswich Garden Suburb, the development will have garden city principles at its core, offering a host of attractive landscapes, public parks and local amenities, including a brand new primary school on its doorstep.

“We are excited to be launching the show homes next year so that purchasers can get the opportunity to get a feel for the stylish design available.”