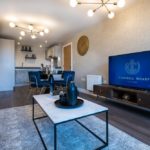 A new waterside development in Milton Keynes, ‘Campbell Wharf’ has been opened by Crest Nicholson.

Crest Nicholson has announced the launch of its new Milton Keynes development, Campbell Wharf. Situated on Grand Union Canal, the development will bring 383 new homes to the area, 51 houses and 332 apartments. It will also feature a 111-berth marina and new businesses, including a waterside pub, café and restaurant.

Work is already well under-way on site, with the first completions due at the end of this year. As well as bringing new homes and businesses to the area, access to this previously unused part of the canal is being improved for residents of Milton Keynes to enjoy.

Marcus Evans, Sales and Marketing Director at Crest Nicholson Regeneration said: “We’ve noticed a growing number of people leaving the capital to live in Milton Keynes thanks to its easy commute, as well as businesses moving to the area with many of their staff choosing to follow their job and live in Milton Keynes. We anticipate this will continue over the coming years and Campbell Wharf is well placed to appeal to this growing market.”

Campbell Wharf is the first residential development on the Grand Union Canal and is strategically located fifteen minutes from Milton Keynes Central and ‘The Hub’ with its host of restaurants and amenities, the Milton Keynes Snow Dome, a cinema, and many more local attractions.