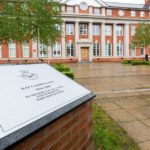 An RAF memorial plaque has been installed by housebuilder Bellway at its development in Bedfordshire.

A memorial plaque honouring the former RAF Cardington base has been unveiled in the town. Local people attended a formal ceremony at the Shorts Building, where speeches were given by RAF representatives. Housebuilder Bellway, which is building new homes on the former site, off Conder Boulevard, helped to organise the event.

Elaine Brown, Sales Manager for Bellway Northern Home Counties, said: “We were really pleased to be able to invite local people and RAF representatives to this special event. This site holds a great deal of history and it is extremely important to us that we honour this. We hope that by installing this plaque, we are giving people a place to pay respect to those who served at RAF Cardington.”

Bellway is building a selection of one and two-bedroom apartments and two, three, four and five-bedroom houses at New Cardington.