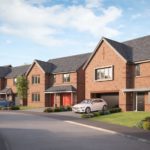 Avant Homes has begun construction on a seven-acre site in Shipley, Derbyshire to deliver a 70-home ‘flagship development’ which will have a total value of £22.7m

The site was acquired by Avant Homes in May this year and is being built as part of the wider Shipley Lakeside scheme.

Situated on the former American Adventure Theme Park site, which closed in 2007, Shipley Lakeside forms part of the council’s proposed Amber Valley Borough Local Plan. Once complete, Shipley Lakeside will regenerate the 44-acre site with 307 new homes as part of a mixed-use neighbourhood.

The development will comprise a mix of three, four and five-bedroom properties and feature 15 of the developer’s house designs.

Avant Homes Central Managing Director, Chris Coley, said: “Shipley Lakeside is a fantastic opportunity to broaden our presence in Derbyshire in order to meet our ambitious growth plans for the business. Our 70-design-led homes will make a great addition to the regeneration of this landmark site and will become a flagship development for Avant Homes Central.”