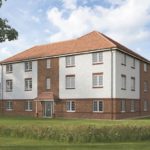 Located at Myton Green, the nine Berwick apartments at the development are available in three impressive layouts, with prices starting from £224,950.

The apartment building is located in a prime location at Purbeck Village with easy access to the entrance of the development while also sitting in a private cul-de-sac, close to a communal green space. Each home across the three-storey apartment building includes an open-plan living space, one double bedroom, a spacious bathroom and ample storage.

The Berwick also includes Avant Homes’ superior specification as standard, which features a designer kitchen, full-height tiling in the bathroom and a fitted wardrobe with sliding doors in the bedroom.

Avant Homes sales and marketing director, Steve Rider, said: “Purbeck Village is our first development in Warwickshire, and it has proven hugely popular with buyers who are looking to be close to beautiful towns such as Royal Leamington Spa and Warwick.

“The Berwick apartments are exclusive to Purbeck Village and buyers won’t be able to find them at any of our other developments, so with just nine available we’re expecting great interest from commuters and first-time buyers, alike.”

The 134-home development is just a short distance from the bustling town of Royal Leamington Spa and Warwick Castle. Available homes at Purbeck Village are priced from £224,950 for a one-bedroom apartment to £620,000 for a five-bedroom home with a separate garage.

Based in Nottingham, Avant Homes Midlands is part of the Avant Homes group, one of the leading private developers of residential property in the UK.

Avant Homes Midlands currently has 9 developments under construction stretching from Ashbourne in Derbyshire to Warwick near Royal Leamington Spa.