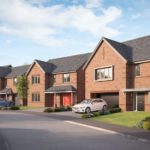 Avant Homes has acquired a seven-acre site to deliver a £22.7m development of 70 design-led homes in Shipley, Derbyshire.

The parcel of land, which received planning approval from Amber Valley Borough Council in August 2021, is situated on the northern edge of the former American Adventure Theme Park site, which closed in 2007.

The new development is part of the wider Shipley Lakeside scheme, which forms part of the council’s proposed Amber Valley Borough Local Plan. The scheme is set to regenerate the 44-acre site with 307 new homes as part of a mixed-use neighbourhood.

Avant Homes’ development will include a mixture of three, four and five-bedroom properties across 15 of Avant Homes’ housetypes.

Initial groundworks at the development are expected to commence in May with the first homes due to be released for sale in August and the showhome following in autumn.

Avant Homes Central Managing Director, Chris Coley, said: “Our Shipley Lakeside development will form part of a fantastic redevelopment of this landmark site, and we’re extremely pleased to be bringing 70 design-led new-homes as part of this exciting project.

“Shipley Lakeside is a fantastic opportunity to broaden our presence in the region and with its unique country park setting, it will become a flagship development within our portfolio. We look forward moving forward with our plans to start initial groundworks in the coming weeks.”