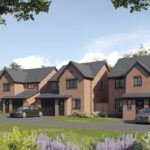 Ashberry Homes has acquired approximately four acres of land on Mosley Common Road in Mosley for a new residential development.

The new development will be known as The Depot, named after the old bus station that was previously on the land.

Planning permission has been granted, with the housebuilder providing 71 new build homes, including a mix of two, three and four bedroom properties.

Hollie Reynolds, Sales Director at Ashberry Homes, says: “Demand for houses in this area of Greater Manchester is particularly high, with Worsley close by and both Manchester city centre and Wigan town centre just 30 minutes’ drive away.”

Construction has started on site and the housebuilder plans to open the show homes in the summer.