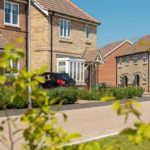 A third of purchasers use Help to Buy at Coningsby development

A third of the homes sold so far at a new development in Coningsby have been purchased by first-time buyers using the Help to Buy scheme.

Chestnut Homes has sold 25 of the 76 private homes being built on the fourth phase of Kings Manor, and of these 25, eight have been bought by those stepping on the property ladder for the first time, using the Government-backed scheme.

Help to Buy, which is only open to first-time buyers, allows people to purchase a new-build home with a five per cent deposit and a 75 per cent mortgage. The remaining 20 per cent is provided in the form of an equity loan which is interest free for the first five years of homeownership.

The scheme can be used to buy homes below the regional price cap for the area, which for Lincolnshire is £261,900.

Helene Key, Sales Manager at Chestnut Homes, said: “The Help to Buy scheme is proving very popular with purchasers at Kings Manor, with one in three of the new homes we have sold on the latest phase being secured using this initiative.

“These are very competitively priced homes and what we have found is that purchasers are pleasantly surprised at what they can actually afford when they investigate the Help to Buy scheme.”

Chestnut Homes is delivering a total of 109 homes, including 33 affordable properties for local people through shared ownership or rent, on the fourth and final phase of Kings Manor, off Hoplands Road.

As part of the planning agreement for this phase of the development, Chestnut Homes is providing funding of £55,282 for sixth form education and £44,363 for healthcare.

The development, which is located to the north of Old Boston Road at the eastern edge of the village, will eventually see 304 homes built.

Helene said: “People have already moved into homes on this latest phase of the development at Kings Manor and a thriving new community is forming. The development as whole is complementing the village of Coningsby and providing much-needed housing in the area.”

A variety of two, three and four-bedroom homes are available at Kings Manor with prices starting from £169,950.